FashionxCore Emo Fight Bot destroying his restaurants, and wiping out his power enhancers

"You Want Cries With That?"

Burger Klown (also spelled Burger Clown) is an evil clown of unknown origin whose sinister plan is to rule the world by making its youth too fat to resist him. He is the main antagonist of "You Want Cries With That?" While not credited properly, one of the female volunteers on set portrayed him.

Nobody entirely knows where Burger Klown came from, but what is known is that he is an evil clown who is enhancing his alien magic powers through a device hidden inside one of his restaurants. He one day hatches a scheme to abduct "small, whiny emo children most likely not to be missed by their parents." He kidnaps them, grinds them up into meat patties, and then mixes them with his alien magic to create burger patties that are extremely addictive and extremely fattening. Fat addicts would be unable and unwilling to resist his bid for world domination.

When Fai stumbles upon a friend of hers from school who ate too many of these enchanted burgers and grew into a ginormous and obese monster, she sets to work to investigate who is behind it. Captain Emohead alerts Fai to what is going on, and explains to her how the evil plan works. He also complains that he tried one of the burgers (somehow,) and found it completely disgusting. Burger Klown has also somehow figured out how to hypnotize teens wearing hoodies, allowing him to create his own Hoodie Patrol to attack Fai with when Emohead sends her after him.

She very quickly dispatches with the Hoodies, but then finds herself in way over her head when the clown sends his meal-item-shaped fight bots to attack the city. He appears to do this out of spite, as the Rangers were the only ones resisting his scam. After the main team of Emo Fight Bots take out the Extra Value Meal Fight Bots, Fai uses her FashionxCore Emo Fight Bot to take out the restaurants.

Burger Klown himself is never seen nor heard from again, but it is assumed he was destroyed some time immediately after his last restaurant was. The kids he'd fattened somehow immediately become thin again.

Burger Klown appears to be single-mindedly obsessed with his evil plan to fame and fortune and world conquest by way of getting everyone addicted to eating at his restaurants. He is an extremely sore loser who can't stand when he doesn't get things his way. 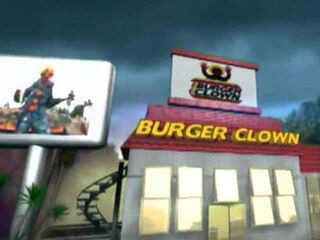 As the need for social commentary rose in Emo Rangers episodes to keep the plots relevant for MTV, the moral message being conveyed initially in Burger Klown's episode is that feeding one's money to the fast food industry purely for convenience is unwise in the long run. They own you, and the convenience has an unpleasant extra fee in the form of obesity. Consumers and companies are equally to blame.

However, per the usual nature of the show; the moral was depicted in a manner that was comedic, distorted, exaggerated, and twisted. In order to avoid a lawsuit from either Burger King or McDonald's, the show's creators designed this villain as a way to merge the two into a composite that more directly got the message across - rather than run the risk of anyone getting distracted by seeing it as a slam against a specific brand.