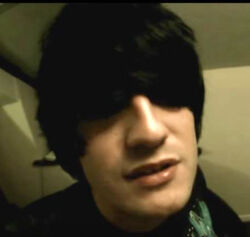 Chris with an emo wig on promises season 2 to itching fans.

Chris Phillips is a director, editor, and motion graphics editor originally hailing from Chelmsford, England. He has since moved to the United States for his work, and been involved in multimedia projects there as well.

Chris attended Bournemouth Media School to get his credentials, and then combined them with his MTV success with Emo Rangers to advocate for himself to get other gigs. This would even land him a project working with Lorde.

Chris is cited commonly as having gotten his inspiration for Emo Rangers after a bad breakup with a girlfriend in 2004. Around that same time, he used the comment "Emo Ranger" to describe how silly a friend of his looked in a ninja costume. He later found another girlfriend, and strived to move in with her in 2009.[1] Doing so, however, meant that Chris was unable to work with Nick as regularly on gathering episode content.

Working with MTV led to him taking other gigs, which led to him moving with his family to the United States to travel and perform where needed. This put him in the Boise area when the time came to shoot the Emo Rangers 2015 Anniversary Special, thus requiring him to use mostly Boise-area actors for the special.

In addition to Emo Rangers, Chris has been a music video director for MTV Push, MTV Sizzle, London Comedy Club, Fei Comodo, the Hype Theory, and the Lords of the Swords. He has also been involved in a lot of commercial print media.