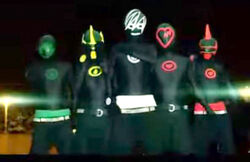 The Mighty Moshin' Emo Rangers, are "depressed teenagers with low self-esteem" that Captain Emohead recruited to battle the Evil Empress and other similar threats, using the power that they wield with their Sweatband Morphers. They developed a mild sense of unity. When it became obvious that they had to move on in life, Emohead allowed a new one to take over, with plans to let that new one eventually have some teammates.

Captain Emohead first recruits Ross, John, Stef, Luke, and Vicken to save England from the Evil Empress and her minion Colonel Crusher. They go on to have a few adventures, before they are required to add Fai to their ranks as the FashionxCore Ranger when their main powers aren't enough anymore. They gained additional help from time to time, such as when they had to save Christmas with the assistance of Panic! at the Disco after an Evil Show Host controlled by the Empress turned a mall Santa into an evil minion equipped with a giant Santa robot to terrorize the city.

After some time, John became incapable of tolerating the effects of marijuana on his body. He decided to give up weed, and adopt a lifestyle of almost no sex, drugs, alcohol, or any similar indulgences. This earned him a new morpher, allowing him to become the StraightxEdge Ranger. But before the old Chronic Stoner morpher could be locked away completely, the Empress created a clone of John utilizing a bad copy of the Chronic Stoner morpher. This forced John to have to face off against his old self, in a parody of "Return of the Green Ranger".

After a few more adventures, the Rangers find themselves battling the Empress on two more documented ocassions. She uses a teddy bear in Vicken's possession to create the Scare Bear, and unleashes an army of teddy bear minions to terrorize England. When the Rangers defeat this army, the Empress swears revenge. She tries once more, by sending the Sold Ya Boy and AvrilBot after the Rangers. When this plan also fails, she goes missing in action. The Rangers then continue to protect their homeworld from a variety of threats similar in nature to the Empress, yet unaffiliated. The New Rave Pirates in particular pose a threat to the town, gaining Luke's attention. Somehow, they are able to turn hypnotized Rave Kids into a New Rave equivalent to the Empress' old Hoodie Patrol minions. Burger Klown picks a fight with Fai, after also learning how to make his own brand of Hoodie Patrollers. To stop him, the Rangers have to wipe out all of his restaurants. Exactly how this works is never explained.

The Rangers grow in power as Captain Emohead discovers more and more ways to upgrade them, and their successes lead to them eventually enjoying four whole years of no activity. This results in them keeping their powers on standby hidden away, while they go on with their ordinary lives.

In 2015, however, a new threat to the world arises. This threat, to disguise his true intentions, poses as a principal of a high school he takes over. He enacts enforcement of specific agreeable social norms, in order to fool parents into believing he has good intentions for the children. Meanwhile, he tries to force children for the pettiest of reasons to take specially-modified prescription drugs that he can channel to turn them into his own Hoodie Patrol. Mary Jane intercepts this, but also discovers where Captain Emohead hid the latest version of the Chronic Stoner morpher. She gets fed up with the Evil Principal's charade, and rebels by throwing out her pills and smoking a joint of marijuana. This activates the morpher, allowing her to become the new Chronic Stoner.

Furious over her successful act of rebellion, the principal activates a doomsday robot and blows his own cover. Mary Jane activates her upgraded Chronic Stoner Emo Fight Bot to engage him, and Captain Emohead calls the other Rangers out of retirement to assist her. However, the principal quickly activates a sequence in his bot that sends them into a time warp, outraged by their interference. Mary Jane lands a lucky shot and kills the principal and his bot. She then drops out of school to become an Emo Ranger full time. The remaining Rangers' whereabouts remain unknown at the time of the series' finale, though they are stated to be "somewhere in the year 2025."

In Volkonir Meets the Power Rangers, three members of the classic Power Ranger team wind up trapped inside the EccentriaVerse, while Volkonir finds himself in their world. Dr. Hanom, in desperation, contacts MODM from Camelorum Adventures for help.

MODM responds by sending the 2017 film Power Rangers to help. But along the way, he also visits the Emo Rangers and convinces Captain Emohead to let them come with him. Ross and Zack form one strike team to take on the minions of Slasionnach. Vicken and Trini form another team. John and Billy form yet another team. Stef teams up with Kimberly to form a strike team to save some children in an office building. Fai, Tommy, and Volkonir take on Slaisionnach directly. Another monster called Clownscavator takes up all the time and attention of Jason and Luke. In the end, a Volkonir-interfaced Dragonzord has to defeat Slaisionnach's giant form with help from the film Megazord and the Mega Emo Fight Bot.

After Slaisionnach is defeated, MODM sends everyone home. The Emo Rangers soon discover a glitch in MODM's powers trapped Stephanie from Lazy Town in the Emo Universe, requiring Luke to save her from the Hoodie Patrol.

While the Emo Rangers were obviously never Power Rangers canon, a fan video on YouTube has suggested that their inclusion in Super Megaforce would have been hilarious. The Neo-Mega Rangers here are depicted in this short switching from Super Megaforce mode to Legendary Emo Ranger mode in order to take down Dizchord.