The following is about the fictional character. For the real-life actress that portrayed her, see Fai Burnett.

Fai on the warpath in "You Want Cries With That?" 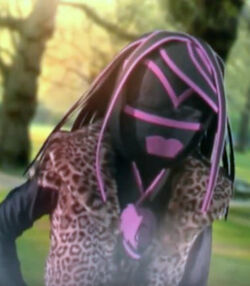 Fai is a teen living in the Emoverse version of Chelmsford, where she inexplicably has her own apartment (in spite never being shown having a day job.) She is chosen by Captain Emohead to become the FashionxCore Emo Ranger in order to give the other Emo Rangers some much-needed backup against minions too powerful for the core team. While her last name is presumably "Archer," the maiden name of the actress portraying the character, her last name is never stated in the series proper.

Fai was always sort of in the background, until she one day struck up the nerve to go on a date with Luke.A Fashionable Choice She also befriended Stef some time later, trying to cheer up the latter by giving her a makeover. However, not all of Fai's ideas on how to help the others improve their image went over well. When a generic evil robot is sent by the Evil Empress to terrorize Chelmsford and the main Rangers aren't enough, Captain Emohead abducts Fai off the street and quickly instructs her in the ways of how to be an Emo Ranger. Her strong fashion sense and deadly capabilities of giving others makeovers result in her becoming the FashionxCore Ranger. With her assistance, the Rangers quickly gain the upperhand over their monstrous adversary. She also proves useful later in helping them take out the Santa Bot.Emo Rangers vs. Santa

Fai never gives up her fashion craft. In fact, she only gets better at it. She is surprised as anyone else when John suddenly goes StraightxEdge. One of her most noticeable makeovers is the one she gives to herself, going for a simpler and more streamlined look over her initial trashy appearance.Weed Better Sober Up She is also given an upgrade to her FashionxCore Emo Zord, turning it into the FashionxCore Emo Fight Bot and making it able to take more hits and deliver more blows. For some reason, she was absent when the Teddy Bear Apocalypse nearly happened. She tries to make up for it, however, when she lends her FashionxCore Hair Straightner bottle to the Rangers to help them make the Emo Blaster for the first time ever.Top of the Flops

She continues dating Luke, though her reasons still remain a mystery. But when the New Rave Pirates attack and Luke catches on to what they're doing, she lets him investigate on his own while she alerts the other Rangers.Rave New World She shows up again for the final battle against the New Rave Neon Bot. Later, she discovers a rogue restaurant mascot with a sinister agenda.You Want Cries With That? She takes this menace and his version of the Hoodie Patrol on personally. However, she winds up needing some help when Burger Klown summons his Extra Value Meal Fight Bots to attack Chelmsford. After the EVM Bots are destroyed by the main five Rangers, Fai uses her bot to take away Burger Klown's powers for good by destroying his restaurants. His alien magic burgers lose all their powers, and the kids that Burger Klown had fattened begin returning to normal sizes. While off doing her own thing, she would come to the rescue again after hearing that Stef's latest date went nightmarishly wrong.Uncle Kuddles and Fiddles the Kid

After a few more adventures of saving Chelmsford as the FashionxCore Ranger, Fai finds that the aliens begin warning each other to avoid Earth. Only one, who takes over Happy Valley High School and turns it into his evil lair while masquerading as a principal to fool emo kids' parents, dares to ignore that warning. Otherwise, the aliens decide to leave Earth alone. The Evil Principal is able to hide his ruse for quite some time, resulting in Captain Emohead's emo sensors failing to trip. By 2011, Fai has decided to put her Emo Wristband Morpher in storage while she attempts to carry on with her life and run a fashion studio. At some point, she and Luke appear to have finally gone their separate ways also - for unexplained reasons.

Fearing Mary Jane cannot handle the menace alone, Emohead calls Fai out of retirement - along with her other five former teammates. Alas, the Rangers don't last very long in battle before the Principal uses a one-time-only option on his robot to generate a time warp. With this, the Principal sends Fai and the others to the year 2025 - place unspecified. Mary Jane is forced to land a lucky shot and defeat the Principal on her own.

As of the end credits, it is still unknown how Emohead will be able to save the veteran Rangers. Fai's fate remains an uncertainty. Emo 5, suddenly bored with everything, looks forward to the displacement as an opportunity to witness the Rangers again in the future and use their predicament for his amusement. He jokes of "unending adventures" with them. However, Emohead shoots this down as a "dickheaded idea."

Fai has had other appearances outside the show - but not many. Since the game started being coded just shortly after the original short film's release, and centered around reiterating the plot to the pilot, Fai was not yet a Ranger. Therefore, she is nowhere to be found in the game.

Under the EA website and Origin username of "DozerfleetProd," that same brand also uploaded Sims 4-compatible re-creations of the Rangers to the Sims 4 Gallery on TheSims.com. That particular Gallery upload includes the six main series Rangers as a single household, though players who import the Rangers into Create-A-Sim can still choose to delete the other Rangers from the household if they only wish to play with Fai. Mary Jane was not included with that package.

With the combined character downloads and mods, playing as Fai in The Sims 4 should not be difficult. Also uploaded to the Gallery under the DozerfleetProd account was an estimated re-creation of Emo Road, allowing players to place Stef or any other Ranger in bedrooms based on the one used for their bedroom scenes in the show. That same lot includes a shed that is a secret passageway to a crude re-creation of the Emo Command Center, though Captain Emohead and Emo 5 are nowhere to be found.

While her helmet is the tricky part, the rest of Fai is fairly easy to put into the game. All the rest of her suit materials are either fudged or closely resembled by clothing items that come standard with the City Living expansion pack.

Fai is described as the trendiest kid on the scene. She comes along to save the day when the Rangers are in too much trouble, and destroys enemies by giving them a makeover. This was intended as a nod toward Power Rangers, by introducing a new member into the team when a monster is too strong for the main team to defeat. She seems to be attracted to Luke, as they've been on several dates. However, she and Luke are not given enough character development for this to be explained in any meaningful way.

She has a habit of declaring things she herself doesn't like to be "not fashionable." Most of her list is reasonable, such as when she condemns Uncle Cuddles for "pedophilia" (more accurately, ephebophilia.) She also uses the line on Burger Clown and his antics, as well as on the New Rave Pirates to tell them she doesn't care for New Rave. The extent to which she says this of her own accord or to impress Luke is unknown. Her opinion of the Teddy Apocalypse is unknown, as she was mysteriously absent from that episode.