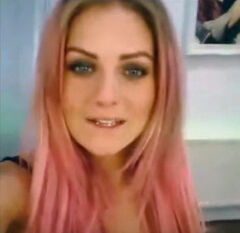 Fai Burnett (neé Archer) is an actress and makeup specialist known for her achievements in various film and television projects across the UK. She portrayed a scene culture version of herself in Mighty Moshin' Emo Rangers, before moving on to more serious roles in costume and makeup design.

Fai attended Great Baddow High School in Chelmsford, and went on to attend the Delamar Academy of Makeup in London. She graduated from the academy with honors, and went on to pursue a professional film and video career in hair and makeup design.

Fai grew up in Chelmsford, where she would have had the chance to meet Chris and the other cast members of Emo Rangers. Her career goals in fashion and makeup for television would lead to her eventually having to move to London. She got engaged to Tim Burnett of MN2S in April of 2014.

The two of them married on June 27th of 2015, about five months before the 10th anniversary special for Emo Rangers was finally released on the Emo Rangers YouTube channel. As a result, she is credited by her married name in that film. She had previously been credited as Fai Archer in all prior projects. She became less involved in major film releases after her marriage, so as to adjust to her married life. She is also a wedding blogger in her spare time, and is enthusiastic about her pets and in videos about animal rescues.

Her only well-known acting has been as her fictional counterpart in Mighty Moshin' Emo Rangers. She was good friends with Chris Phillips at the time, and was addressed about the possibility of involvement in making the series that would follow the 2005 short film more visually appealing.

This further led to inspiration to the effect that she could be the mysterious new Purple Ranger. In "A Fashionable Choice," which often aired on MTV as being fused with "Beware the Funky Monkey," Fai made her speaking character debut as the FashionxCore Emo Ranger. She would appear again on the show for "Emo Rangers vs. Santa" and "Weed Better Sober Up." She was absent from "Bearly Legal," and only showed up briefly - morphed - for "Top of the Flops."

She made brief appearances in "Rave New World" and "Uncle Kuddles and Fiddles the Kid" as her other professional and educational endeavors allowed. She was otherwise only available to have a major role in "You Want Cries With That?," which focused on her character.

Fai was available for voice work and for a brief video chat as her character in 2015. Because Chris had already moved to the US since then, she was unavailable for filming otherwise. Her character was rendered from then on purely with CGI while morphed. The CGI figure was noticeably missing her trademark vest, as it would've taken too long for Nick to render under the time and budget constraints for the anniversary special.

After this, Fai decidedly preferred life behind a camera to life in front of one.

Helping out with the sets for Emo Rangers back in 2005 proved to be Fai's big break, but it was a short-lived step up the ladder. She assisted the show's second season in 2007, only for the fruits of her labors to not manifest until MTV agreed to finally air the episodes in late 2010. By then, she had already moved on to developing her own freelance brand of Fai Archer Hair and Makeup in London.

She was able to find work for a firm called Creative Skillset in August of 2011 as a makeup artist. This allowed her to become head of the makeup department for Trevor Miller's film Riot on Redchurch Street in 2012, documenting the difficulties of British society in trying to get LGBT and Muslim communities to coexist peacefully via a musical drama. That same year, Paul Cotrulia's Modified also allowed Fai to show off her talents to a significant degree. The weird sci-fi designs seemed to be perfect for testing out her talents.

In 2013, Fai worked as a makeup trainee for the internationally successful period piece Belle. This also landed her a gig as a hair and makeup trainee for 2013's How I Live Now. She continued to work on projects into 2014, including Pantani: The Accidental Death of a Cyclist and The Man in the Room. She slowed down on her film gigs only after getting engaged to Tim Burnett. She took a pause from her cinematic endeavors in 2015 and 2016, as she adjusted to married life following her wedding in July of 2015.

In 2017, Fai and Saara Aalto worked on a music video dubbed "A Lidl Way of Saying Thank You," for the Finland branch of Lidl (a company similar to Aldi, but with its American business primarily on the eastern coast whereas Aldi is more common in the midwest.) The video was released to Facebook on May 25th.