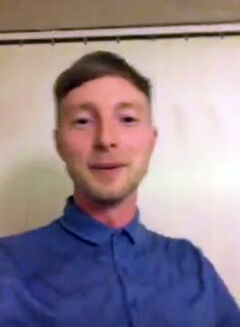 John, portraying his character in the 2015 special.

John Penn is an actor and water systems technician known only to most as the actor who played the StraightxEdge Ranger on Emo Rangers.

Little is known of his education history by anyone living outside of Chelmsford. It is known he attended Moulsham High School.

John is a fan of indie films such as Napoleon Dynamite. That being said, he agreed with most that the animated series of it was terrible. He is also a huge soccer fan.

Given he was once a young Chelmsford kid, he was in the right place at the right time to run into Chris Phillips and get auditioned for the part of the Chronic Stoner Emo Ranger. He played the role as best as he could with the limited script materials he was provided with. Following suggestions from MTV to clean up his character's image, John agreed to research StraightxEdge culture and portray the character undergoing a transformation after giving up marijuana. He featured in the season 2 episode "Weed Better Sober Up," which wound up being a parody of "White Light" and "Return of the Green Ranger."

After this, John's day job interfered with availability for shoots. He wound up having a much-reduced role in the episodes that followed, though he made sure to be available for suit acting and dubbing for "You Want Cries With That?." He appeared again briefly for the 2015 special, but did little else.

John began a job in August of 2007 working at Lloyd's Banking Group as a fraud prevention officer. This limited his availability right away, leading to him being the first to get a special episode dedicated to him for season 2 of Emo Rangers. His character got to kick drugs and get new powers. He is all but completely absent from "Bearly Legal," "Top of the Flops," "Rave New World," and "Uncle Cuddles and Fiddles the Kid" as a result. He had slightly more of a role in "You Want Cries With That?," though he was never seen unmorphed except in stock footage.

He eventually left Lloyd's Banking Group in 2013, and was available briefly for the 2015 special. However, he was unable to afford a flight to Boise to help Chris and the others out directly. On February 29th of 2016, John got his job at Essex & Suffolk Water, where he remains to the present day.