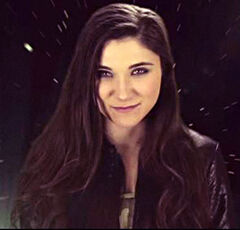 Krystal Moore is an actress and comedian native to the Boise area. She was chosen to portray Mary Jane Greenfield in the Emo Rangers 2015 Anniversary Special.

Krystal dreams of being a big time star. She has visited several colleges in her area, but has not documented herself specifically attending nor graduating from any of them. She has made public the fact that she attended Weiser High School, and that she graduated from there in 2002. During her tenure, she became president of the Drama Club. Krystal likes many things.

Krystal has a boyfriend and two children. She has studied jujitsu, and is proud of her accomplishments with it. She is known for her fiesty and fiery personality.

Krystal has been involved in various stage plays, including Steel Magnolias, The Torch-Bearers, and Over the River and Through the Woods.

In addition to stage acting and portraying an Emo Ranger, Krystal has portrayed a supporting role as a soldier in Chris' film adaptation of Battle Squadron Alpha. She was in Apricott Films' Swipe, and has also played a minor role in Joshua Ray Malan's web series Animal Warmth.

When not acting nor doing stand-up comedy gigs, it is unclear where Krystal works.