The following article is about the in-series character. For the similarly-named actor that portrayed him, see Luke Markey. For the actor who portrayed Captain Emohead, see Luke Cole. 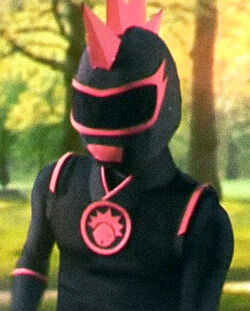 Luke is a teen living in the Emoverse version of Chelmsford, where he inexplicably has his own apartment (in spite never being shown having a day job.) He is chosen by Captain Emohead to become the Chaos Mohawk Emo Ranger in order to thwart the Evil Empress and her minion Colonel Crusher. While the strongest member physically, he lacks the focus needed to be the team leader. This prompts Ross to receive that title instead. His last name is presumably "Markey," the same as the actor portraying the character. Though, his last name is never stated in the series proper.

Luke is introduced and given his powers early on, when he has spiky blonde hair.2005 short film. His hatred of the government, mistrust of capitalism, and disdain for his own mother have resulted in him being granted the powers of the Chaos Mohawk Emo Ranger. In spite this, his general laziness holds him back. He quickly develops a crush on Fai, who appears to further make him more docile. A Fashionable Choice Very little is known about him, even by his own friends, given how secretive he can be. He frequently ventures off on adventures on his own. When the Generic Evil Robot burns off most of his hair, he turns to Fai for help in making over his image - and she gladly obliges. Later, Luke has to fight off an entire legion of Santa Hoodies when he is ambushed on his way to buy Christmas presents.Emo Rangers vs. Santa He is given a special Christmas enhancement to his powers, though it proves to be of little use.

Luke is as shocked as the other Rangers when witnessing that John has gone StraightxEdge, but is reasonably supportive of the change.Weed Better Sober Up He gets an upgrade from his old Zord to the new Chaos Mohawk Emo Fight Bot, allowing him and the other new Fight Bots to interact with John's new StraightxEdge Samurai Fight Bot. He is almost done in when Mr. Fluffy is brought to life by the Evil Empress along with a massive army of teddy bears. However, he refuses to let his last fight be against a child's toy.Bearly Legal / Scare Bear He is later confused when one of the new monsters he has to help fight off is a robot that looks like Avril Lavinge.Top of the Flops

It is Luke who first makes the connection that the New Rave Pirates are aliens, and are obviously up to no good. He wastes no time jumping into action to stop them - not even caring if he escalates the battle first.Rave New World When Fai winds up in trouble battling an evil restaurant mascot, Luke is all too eager to be among those coming to her rescue.You Want Cries With That? His Fight Bot even delivers the fatal blow to one of the Extra Value Meal Fight Bots that Burger Klown sends to attack Chelmsford out of retaliation for Fai's interference. He is also as weirded out by Stef's date as everyone else, and kills the monster with just as much extreme prejudice.Uncle Kuddles and Fiddles the Kid

After a few more adventures of saving Chelmsford as the Chaos Mohawk Ranger, Luke finds that the aliens begin warning each other to avoid Earth. Only one, who takes over Happy Valley High School and turns it into his evil lair while masquerading as a principal to fool emo kids' parents, dares to ignore that warning. Otherwise, the aliens decide to leave Earth alone. The Evil Principal is able to hide his ruse for quite some time, resulting in Captain Emohead's emo sensors failing to trip. By 2011, Luke has decided to put his Emo Wristband Morpher in storage while he attempts to carry on with his life. He is shown to have begun conforming more with societal norms, and his teenage depression appears to be gone.

Fearing Mary Jane cannot handle the menace alone, Emohead calls Luke out of retirement - along with his other five former teammates. Alas, the Rangers don't last very long in battle before the Principal uses a one-time-only option on his robot to generate a time warp. With this, the Principal sends Luke and the others to the year 2025 - place unspecified. Mary Jane is forced to land a lucky shot and defeat the Principal on her own.

As of the end credits, it is still unknown how Emohead will be able to save the veteran Rangers. Luke's fate remains an uncertainty. Emo 5, suddenly bored with everything, looks forward to the displacement as an opportunity to witness the Rangers again in the future and use their predicament for his amusement. He jokes of "unending adventures" with them. However, Emohead shoots this down as a "dickheaded idea."

The game by StormVideoGames.com features a highly-simplified version of Luke, basing his appearance in the game off of his debut in the 2005 short film. This is in keeping with the fact that the game also reiterates the short film's plot. Luke's Chaos Shockwave ability is shown in a way unique to this game. While a sustained wave is reasonably effective at killing several enemies (much more so than any of Luke's punches,) it wears off quickly and takes a long time to recharge. Luke is the second Emo Ranger to be playable, with Ross preceding him and John being the next one that is unlocked after so much progress. With numeric keys, Rangers can be selected amongst. The final levels require unlocking Stef, though Luke can still be played at any time by pressing "2."

On April 24th of 2017, DzMD of Dozerfleet Labs uploaded to DeviantArt and MediaFire a listing of several mods in a few folders which would allow players of The Sims 4 to import Emo Ranger suits into their PC games. The mods base the Rangers' appearances on a mixture of their first and second season looks, with primary emphasis on the first season. (Hence, no collar trims.) The helmets are not 100% show-accurate, but are as close as the custom mesh employed by Grilled-Cheese-Aspiration at Tumblr would allow. While John's Chronic Stoner form is included, the marketing images make very little mention of it. Mary Jane's Neo-Chronic Stoner outfit is nowhere to be found, and neither is the Evil Chronic Stoner variant suit.

Under the EA website and Origin username of "DozerfleetProd," that same brand also uploaded Sims 4-compatible re-creations of the Rangers to the Sims 4 Gallery on TheSims.com. That particular Gallery upload includes the six main series Rangers as a single household, though players who import the Rangers into Create-A-Sim can still choose to delete the other Rangers from the household if they only wish to play with Luke. Mary Jane was not included with that package.

With the combined character downloads and mods, playing as Luke in The Sims 4 should not be difficult. Also uploaded to the Gallery under the DozerfleetProd account was an estimated re-creation of Emo Road, allowing players to place Luke or any other Ranger in bedrooms based on the one used for their bedroom scenes in the show. That same lot includes a shed that is a secret passageway to a crude re-creation of the Emo Command Center, though Captain Emohead and Emo 5 are nowhere to be found.

Luke's helmet is a Dozerfleet recolor of the DJ helmet that includes the mohawk, thus allowing him to get by without the custom mesh by Grilled-Cheese-Aspiration.

Luke is suspicious of all authority figures, though he does seem to be okay with Ross and Captain Emohead. In spite the risk to himself, he often likes to venture off on his own, only reaching out to his friends when he is in over his head. Due to crony corruption, he has developed a mistrust for capitalist systems and believes their integrity is unsustainable. Yet, he finds socialist leaders equally untrustworthy. This has given him a general mistrust for all forms of government.

He also has a bad relationship with his mother, though his reasons for this are never explained. He also knows that, in spite how appealing the idea of it may seem at first, complete anarchistic / chaotic systems would also be bad, forcing him to reluctantly save a society he doesn't entirely trust from even worse evils - rendering his entire existence a paradox.

Around women, he tends to come off as desperate. He is shown in one episode wanting to hook up with Fai, though it is never made clear if he intends this for a long-term relationship or solely for a one night stand. He and Emohead later conspire to seduce some of the women saved from the New Rave Pirates.