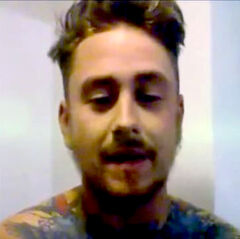 Luke Matthew Markey is an actor, stuntman, and engineer originally from Chelmsford, UK. He portrayed a punk version of himself on Mighty Moshin' Emo Rangers, where he was the Red Chaos Mohawk Emo Ranger. In real life, he has become a tower engineer.

Luke's first major acting part was as his character on Emo Rangers. This was chosen due to his proficiency at the time in parkour. He had a good lot of screen time in the 2005 short film, and also featured quite prominently in "A Fashionable Choice" and "Emo Rangers vs. Santa." In 2007, when season 2 was being produced, he had limited availability due to his involvement as a stuntman in another project: Blood & Chocolate.

This meant he was only just barely involved in "Weed Better Sober Up." He sought to make up for it with his roles in "Bearly Legal" and "Rave New World," but was also mostly absent from "Top of the Flops." He returned for "You Want Cries With That?," but only briefly to shoot some scenes in-costume. He finally showed up near the end of "Uncle Cuddles and Fiddles the Kid," but was not seen outside of his costume.

Many spots of Luke telling jokes were replaced with a stock audio clip of him yelling "tits" for seemingly no reason.

He would return to his Emo Ranger role again, briefly, for the 2015 10th Anniversary Special. Like the others, he was only seen through a video chat session. His suited-up character was replaced with CGI for morphed scenes.

Luke works for the SWANN Group, and does maintenance on telecommunications systems all throughout Essex and Suffolk counties. He mostly works in the area near Chelmsford, where he grew up. However, he is frequently working in his new town of Braintree, and has maintenance tasks elsewhere.