Mary Jane about to morph. 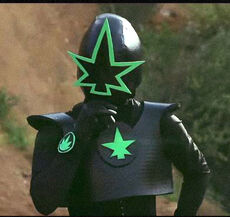 Mary Jane Greenfield is a teenager looking for a purpose in life in the Emo Rangers 2015 Anniversary Special. She never expects to find her purpose as being an Emo Ranger though. She was portrayed by actress and comedian Krystal Moore of Boise.

Wishing to find a new high school to fit in at and make her mother proud (her father is never mentioned, and his absence may explain a lot of her predicaments), Mary Jane takes up the offer to attend Happy Valley High School. However, the school grounds bear strange, prison-like features that immediately cue her in that there is something off about the place. She attempts to take a selfie, but quickly discovers that selfies aren't allowed on school property - not even for first-day students who haven't yet been handed a rule book! Her cell phone is completely confiscated, and she is sent to after-school detention. The Principal begins showing off properties more typical of the evil aliens that raided Chelmsford years ago than a normal human principal of a high school should have, further cuing her in that something is really wrong.

She is sent to the school nurse, as the Principal is also a doctor and pharmacist somehow. She is put on prescription drugs that fill her head with horrifying and evil thoughts, in order to control her behavior. She begins noticing strange symptoms from other students - right before they vanish entirely. Not wishing to become like them, she begins to rebel and fish for answers. She gets those answers when she ignores school rules and allows the Mysterious Vagrant to hand her a key to a secret locker. She seizes her first possible chance to dump her prescription pills down a toilet, then she goes to the secret locker - in one of the few parts of the school that no hidden cameras are located in - and learns from the inner contents of the locker all the secrets of the Emo Rangers. She also finds a way to contact Captain Emohead, awakening him from years of hibernation along with a bought-back and upgraded Emo 5.

Ignoring Emohead's advice, she decides to smoke one of John's old joints. Her entire fashion sense is altered, and she goes full-tilt rebel as the new Chronic Stoner Emo Ranger. This infuriates the Principal, who now also knows that Emohead will help her to blow his cover as being an evil alien in disguise. He reveals that he's been turning students who respond particularly well to his drugs used to brainwash them with into his own version of the Hoodie Patrol. He unleashes his Hoodies to kill Mary Jane to cover up his evil plan, but she very quickly disposes of the Hoodies.

The Principal, realizing all the Hoodies being beaten to submission will snap out of their trance and sell him out, activates a giant robot to destroy Boise with in retaliation. He also hopes to use the robot to squash Mary Jane flat out of revenge. Mary Jane is forced to morph into a full-blown Chronic Stoner Ranger and engage him in battle. She debates ethics with him the entire time, but he is revealed to enjoy being cruel and foul way too much to listen to her rants.

Upon Emohead's advice, she summons her Chronic Stoner Emo Fight Bot with help from her Bong Flute at exactly 4:20 in the afternoon. The Principal proves too experienced for her to beat right away, as she needs more time to get familiar with her Bot's controls. Emohead tries to summon the other Rangers to help her, but they are quickly ambushed and sent to the year 2025 by a beam the Principal fires from his evil bot. Mary Jane learns her controls in time to land a lucky shot that locates a weak spot on the Principal's Bot, blowing it up. The Principal himself presumably dies in the explosion.

After this battle, Mary Jane drops out of school to become an Emo Ranger full time. It is unknown what will become of her next.

Mary Jane begins as a cautious optimist looking to fit in. She's been raised to be highly morally conscious, given her strong upbringing involving the Mormon church in her area. However, she is also quick to notice things others don't and grow suspicious. The principal of Happy Valley High rubs her the wrong way immediately, leading to her suspecting his plans. She has a particularly strong disdain for the principal's nonchalant attitude toward sexual harassment, as well as his hypervigilance and super-excessive strictness about enforcing increasingly arbitrary rules.

Her tolerance quickly reveals itself to have limits, as her curiosity gets the best of her and she ignores school rules to take the key from the Mysterious Vagrant. From there, she tries a joint hidden in the Secret Locker and discovers her inner angsty rebel. She tries to balance her newfound love of marijuana and rebel clothes with her more traditional mores, but is convinced that everything she does that would break her mother's heart is now somehow justified simply because she's saving the world as a full-time Emo Ranger. Audiences are expected to be divided on the merits of her "end justifies the means" rationale.

Given that Chris Phillips had moved to the United States some time after season 2 of the series ended, he was unable to maintain regular contact with the original cast. He'd hoped to have his friend Paul Garson become Paul, the Orange Rockstar Emo Ranger, for a major feature-length motion picture that MTV would fund. Alas, these plans didn't materialize for a variety of reasons.

Instead, Chris befriended several local actors and comedians in the greater Boise area, convincing them to make a milestone celebration for the series. Given how they all felt about various controversial bits of drug legislation in the UK and US, the piece would be a commentary on this. Also, lack of contractual obligations to MTV in the US meant that the special could bring back the Chronic Stoner Ranger devoid of significant backlash.

Krystal agreed to play Mary Jane, seeing the opportunity to show off her martial arts skills as well as her acting and comedy abilities.