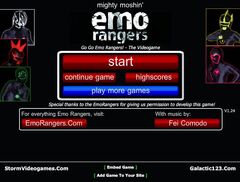 Mighty Moshin' Emo Rangers: The Video Game is a Flash-based online game that was developed by StormVideoGames.com in celebration of the original short film's release.

The game's intro more or less reiterates the short film's plot about the Evil Empress and Captain Emohead. Since these events are before the Generic Evil Robot arrived and proved too powerful for the main five Rangers, Fai does not make an appearance.

The gameplay is largely simplified. After several levels after unlocking Stef, if the player has not used up all of their Emo Life Icons, they win. If you use them all up before then, you die, and a Ranger will whine about how the game is too tough to beat.

Players can start with 3 Emo Life Icons, but will have up to 5 if they keep all icons upon unlocking Stef. Health is a universal statistic for all Rangers, so switching Rangers does not affect the health of one's Emo Life Icon. Only unlocking a new Icon seems to regenerate health. If an Icon is expired, then the player will be minus an Icon and have full health and power again. Health quickly counts down, as it only takes a few hits to defeat a Ranger. As such, Rangers have to be just as meticulous about avoiding enemies as they are about fighting them.

There is a power meter as well, that controls a Ranger's ability to utilize their abilities in battle. Ross has the most effective against a singular enemy: the Depression Ray. One or two rays is an instant death sentence to the nearest Hoodie in his direct path. However, his ability also uses up power very quickly, requiring him to hide from combat until it regenerates. Luke's Mosh Rage allows him to run into multiple enemies and crush them, but more powerful Hoodies can still do him damage. John has Weed Bubbles, which are very slow and not necessarily deadly right away. However, their range makes them effective in knocking enemies down. Vicken has the most effective mid-range power: Weeping Tears Attack. It takes a long time to charge, but the droplets are instantly fatal to enemies. Stef's Bleeding Heart is more of a shield than a weapon, making it easier for her to punch enemies without getting hurt. However, it's not the most effective.

The only enemies most players have ever unlocked are the Hoodie Patrol. The Hoodies simply get tougher and more aggressive with each passing level. They start off with normal Hoodies, who walk around in an almost zombie-like state and fashion. These will only attack if you approach them. Later, more of them take initiative to stalk Rangers. Additional ones later on actively throw razors at the Rangers, so as to entice them to cut themselves. 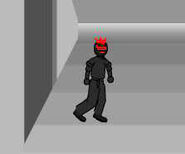 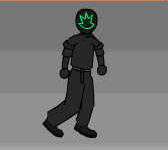 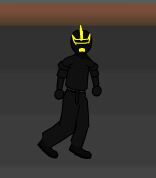 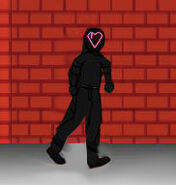