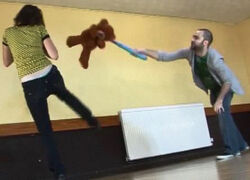 Nick assisting Vicki with blocking and effects for "Bearly Legal."

Nick Pittom is a visual effects artist originating from England. He co-created Emo Rangers, and also served as its chief editor and backup writer. He has since gone on to become the founder of Fire Panda LTD, and seeks to aid in making VR gaming into the future of video games.

In "Emo Rangers vs. Santa," Nick was the suit and voice actor for Evil Mall Santa and his Santa Bot. He also co-directed that episode.[1]