The following is about the actor. For the character he portrays on the show, see Ross. 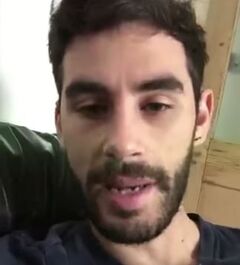 Ross, making a cameo for the Emo Rangers 2015 special.

Ross Fretten is an award-winning product designer and director involved in a variety of projects for companies around Britain. He is also a mentor for app design-aspiring students. He is perhaps best known outside of the UK for his role portraying the Introspective Emo Ranger on Mighty Moshin' Emo Rangers. In late 2017, he became a candidate on season 13 of The Apprentice UK (not to be confused with its US equivalent, nor its Irish equivalent.)

Growing up, Ross attended schools in the area around Chelmsford, where he would have had the chance to meet Chris. Most of the group that became the production cast and crew were tight-knit friends well before the project. Shortly after shooting season 2 of Emo Rangers, Ross went on to enroll at the Ravensbourne College of Design and Communication.

While there, he became a consultant to the Online Strategy Group, a member of the Intranet Working Group, a co-head of Social Media Ravensbourne in 2012, a CDP liaison in 2011, a Social Media Week manager of web, post-production, and editorial materials, and a student ambassador.[1]

He graduated with a first class bachelor of arts degree as a leader in digital design in 2012. He specialized in multi-platform digital products, and was particularly fascinated in the topic of exploring tech development and its interactions with human behavior[2].

Ross keeps a lot of details private about his life. He has admitted on Twitter though that he is a hobbyist who loves things pertaining to technology, gaming, psychology, dogs, and dinosaurs. He is also bilingual, knowing French.

So far, the only known acting role for Ross is his role as an emo version of himself. He was also heavily involved in helping Chris and Nick to promote the series early-on. He features prominently in all of season 1, and got strong parts in most of season 2 as well. "Top of the Flops" featured him the most, as he was the focus of that episode. He later had very minor fill-in roles for "Rave New World" and "Uncle Cuddles and Fiddles the Kid," due to his teammates having limited availability. He was a stronger presence in "You Want Cries With That?," where he lent many quips.

He described in an interview to MTV that most of his lines were ad-libbed from a script that was usually written only a day before - and not read until day-of-shoot[3]. He wore a wig for season 2, but had various issues with it that led to him not bothering with it after only two episodes in season 2. Viewers were left to assume the character got a haircut for no reason.

He returned briefly in a video chat session for the 2015 special, but couldn't make it to Boise to play the suited-up Ranger. He was therefore replaced for that scene with a CGI model.

Ross has worked at Apps for Good as a mentor since 2014. He has also worked for Apple, Olympic Broadcasting System, and Ogilvy One.

In September of 2017, Ross became a candidate / contestant on the UK Apprentice TV series.[4] He and other 17 candidates were to be broken into two teams, membership depending on the assignment, to see which candidate can most impress the host: Alan Sugar (supposedly the British version of Donald Trump.)