Army of the Evil Empress

"Top of the Flops" 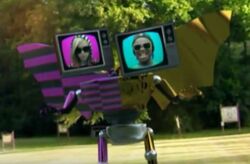 Sold Ya Boy (also referred to as Sold Ya' Kid) is a villain in the TV series episode "Top of the Flops." He's an obvious parody of Soulja Boy. He was portrayed by Thanda Mutero, who bears a vague resemblance to DeAndre Way. This is in contrast to Georgina Sapsford, who portrayed the AvrilBot and bore a stark resemblance to Avril Lavinge.

Sold Ya' was a greedy musician from the get go, who believed he should live in a mansion and have diamond-studded swimming pools. However, the Evil Empress makes him a monster and gets behind his music - if only so the two of them can run a credit card scam. The Empress promises Sold Ya' all the wealth he can handle - if he lets her use the scam to gradually take over the world's money supply.

Sold Ya' proves really successful at first, hypnotizing many children and young teens into being his minions with his horrible music. They even begin dancing similarly to the hostages under Zedd's control in the Power Rangers episode "Zedd Waves."

From there, Sold Ya' almost lures Ross into the scam - but Captain Emohead lectures Ross not to go through with it. Ross learns about the scam, and about how "untrendy" it is to pay for music in the era of music bootlegging. He heads to the park to talk sense into the kids, but Sold Ya' unleashes them on Ross with intent to have Ross murdered. Ross morphs on Emohead's suggestion, and fights back. By himself, Ross proves too powerful for Sold Ya' to handle. Therefore, Sold Ya' summons a knockoff Terminator robot modeled to look like Avril Lavinge. The AvrilBot is able to use her magical pop guitar to trap Ross helplessly in mid-air, similarly to how Guitardo could do that to the ordinary Power Rangers.

The other Emo Rangers arrive in time to break Ross free. But they annoy the AvrilBot. A panicking Empress, running low on her magic and fearing the need to flee back to where she came from in disgrace, makes a desperate move by merging Sold Ya' and the AvrilBot into the Pop-Rap Collaboration Monster. However, the Rangers use the Emo Blaster to kill the monster before the Empress has a chance to make it grow.

Sold Ya' is never seen, heard from, nor mentioned by anyone ever again. Ross takes the AvrilBot home and puts her back together - reprogramming her to be a sex slave. This irritates the Empress into finally giving up her bid for world domination. Besides...she now has to return home and tell her superiors (if any) that she was defeated by whiny emo kids!

Sold Ya's mission from the Empress appears to be his almost single-minded goal and obsession. He has no qualms at all about sending children in a flash mob to murder anyone who questions him or his motives. He is also really sensitive about music property rights, letting his guard down after Captain Emohead irritates him by suggesting that music piracy would be preferable to a world where Sold Ya' controls all the world's music.

He is otherwise a fairly one-note enemy, who is easily defeated in spite having a little bite to back up his loud bark.

When searching for friends and volunteers for the episode, Thanda volunteered. However, Thanda's audio was lost over the course of production time. New voice work had to be dubbed in to replace him, and the show creators simply ran that dub through heavy voice distortion to make it not sound like them.