The following article is about the in-series character. For the similarly-named actress that portrayed her, see Stef Braithwaite.

Stef, searching for her date. 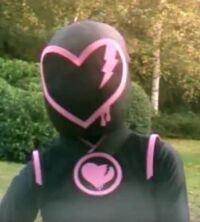 Stef is a teen living in the Emoverse version of Chelmsford, where she inexplicably has her own apartment (in spite never being shown having a day job.) She is chosen by Captain Emohead to become the Bleeding Heart Emo Ranger in order to thwart the Evil Empress and her minion Colonel Crusher. While her last name is presumably "Braithwaite," the same as the actress portraying the character, her last name is never stated in the series proper.

Stef is recruited in 2005 by Captain Emohead to aid the other Rangers in saving Chelmsford from the Evil Empress and her minion Colonel Crusher.2005 short film Little is known about her at the time, except that she is good friends with Vicken and that she is furious at her (name never mentioned) ex-boyfriend for dumping her in front of the entire school. This gives her the bitterness necessary to become the Bleeding Heart Emo Ranger - with the tools to crush the hearts of her enemies. She later introduces Fai to her friends, and Captain Emohead quickly rules that Fai would make an excellent sixth Ranger.A Fashionable Choice Fai gives Stef a makeover, though Stef is not completely sure she likes it. She later helps the boys defeat the Santa Bot to save Christmas.Emo Rangers vs. Santa

By late 2007, Stef is able to get her Pterodactyl Emo Zord upgraded to a Ladybug Emo Fight Bot.

She later finds herself in mortal danger when an army of teddy bears are brought to life.Bearly Legal / Scare Bear She learns some time later on how to combine her Bleeding Heart Camera with the other Rangers' weapons to form the Emo Blaster - in the nick of time to defeat the Pop-Rap Collaboration Monster.Top of the Flops She later has to help the others battle a neon New Rave Bot.Rave New World She also proves what she can do single-handedly when her Emo Fight Bot battles the Extra Value Meal Bots without combining with the others to form the Mega Emo Fight Bot.You Want Cries With That?

Her biggest character development moment comes when she tries to get a date online.Uncle Kuddles and Fiddles the Kid While hesitant to fully learn her lesson, she agrees to keep her friends closer when going on first dates with someone. This is after she discovers her date is really a mutant ephebophile who is bent on raping her. She winds up needing the other Rangers to arrive and assist her in using the Emo Blaster to kill her date. Worse, Captain Emohead jokingly threatens to call the police on her. Lesson learned, don't meet up with random people in parks on your own.

After a few more adventures of saving Chelmsford as the Bleeding Heart Ranger, Stef finds that the aliens begin warning each other to avoid Earth. Only one, who takes over Happy Valley High School and turns it into his evil lair while masquerading as a principal to fool emo kids' parents, dares to ignore that warning. Otherwise, the aliens decide to leave Earth alone. The Evil Principal is able to hide his ruse for quite some time, resulting in Captain Emohead's emo sensors failing to trip.

Fearing Mary Jane cannot handle the menace alone, Emohead calls Stef out of retirement - along with her other five former teammates. Alas, the Rangers don't last very long in battle before the Principal uses a one-time-only option on his robot to generate a time warp. With this, the Principal sends Stef and the others to the year 2025 - place unspecified. Mary Jane is forced to land a lucky shot and defeat the Principal on her own.

As of the end credits, it is still unknown how Emohead will be able to save the veteran Rangers. Stef's fate remains an uncertainty. Emo 5, suddenly bored with everything, looks forward to the displacement as an opportunity to witness the Rangers again in the future and use their predicament for his amusement. He jokes of "unending adventures" with them. However, Emohead shoots this down as a "dickheaded idea."

The game by StormVideoGames.com features a highly-simplified version of Stef, basing her appearance in the game off of her debut in the 2005 short film. This is in keeping with the fact that the game also reiterates the short film's plot. Stef is the final Emo Ranger to be playable, with Ross, Luke, John, and Vicken preceding her in unlock sequence. With numeric keys, Rangers can be selected amongst. The final levels require unlocking Stef, though any previous Ranger can be used at any time by pressing buttons 1-4. To return to using Stef, users need only press "5."

Under the EA website and Origin username of "DozerfleetProd," that same brand also uploaded Sims 4-compatible re-creations of the Rangers to the Sims 4 Gallery on TheSims.com. That particular Gallery upload includes the six main series Rangers as a single household, though players who import the Rangers into Create-A-Sim can still choose to delete the other Rangers from the household if they only wish to play with Stef. Mary Jane was not included with that package.

With the combined character downloads and mods, playing as Stef in The Sims 4 should not be difficult. Also uploaded to the Gallery under the DozerfleetProd account was an estimated re-creation of Emo Road, allowing players to place Stef or any other Ranger in bedrooms based on the one used for their bedroom scenes in the show. That same lot includes a shed that is a secret passageway to a crude re-creation of the Emo Command Center, though Captain Emohead and Emo 5 are nowhere to be found.

One major note about this is that the slight alternate timeline places events in "Weed Better Sober Up" in late November of 2005, meaning that John is already the StraightxEdge Ranger before the Christmas Special. Part of this was to avoid any moral dilemma that the 1993 Rangers would otherwise face with having a fellow Ranger be on drugs.

Little is known of Stef's personality, other than that she is angry over being dumped in front of her whole school by her ex. She wants to find another man to replace him with, but has to resist the urge to want to hurt the hearts of other men as a proxy of revenge on the man that hurt her. Her Bleeding Heart powers enable her to dampen the enthusiasm of her enemies, "breaking their hearts." She loves taking selfies and posting to her MySpace and Facebook accounts. She is also shown to be a tad promiscuous, and is reckless about online safety.