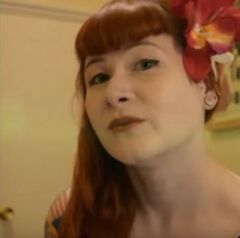 Stef, assuming her character again for the 2015 special.

Stef is a food blogger and pinup model from Chelmsford, England, otherwise known for portraying the Bleeding Heart Emo Ranger.

Stef operates her modeling and blogging operations out of London, not far from Chelmsford. She enjoys traveling, and regularly attends Viva Las Vegas Rockabilly Weekend. She has been to the Rockefeller Center in New York City before, and to Central Park. She has also been to LA, to the Toi on Sunset Thai restaurant.

Stef and Vicki had been friends with Chris for a few years prior to Emo Rangers existing. She was only around 17 at the time when Chris came to her to portray a character that was supposed to be about 15. Two years later, she found herself at age 19 portraying a more stylized version of the character - supposedly around 16 or 17 in-universe then. She was prevalent in all of the first season, and in "Weed Better Sober Up" in season 2. She was also more available than most for "Bearly Legal," yet faded into the background for "Top of the Flops" and "Rave New World." She lent her voice credits to "You Want Cries With That?," but didn't appear unmorphed except in stock footage.

She became the focus of "Uncle Cuddles and Fiddles the Kid," as season 2 featured episodes focused around each character individually. This was in contrast to season 1, where everyone was to feature heavily in every episode. Stef returned to the role of Bleeding Heart Emo Ranger one last time for the 2015 10th Anniversary Special, but was only around for a few seconds in the final edit. It is unknown if she has done any acting since then, but her modeling and blogging have kept her busy.

Stef has been doing retro and pinup modeling since 2008.