The following article is about the in-series character. For the similarly-named actress that portrayed her, see Vicki Godby. 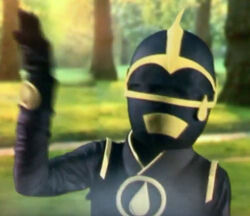 Vicken is a teen living in the Emoverse version of Chelmsford, where she inexplicably has her own apartment (in spite never being shown having a day job.) She is chosen by Captain Emohead to become the Weeping Tears Emo Ranger in order to thwart the Evil Empress and her minion Colonel Crusher. While her last name is presumably "Symes," maiden name of the actress portraying her, her last name is never stated in the series proper.

Vicken is called away from her writing of poetry by Captain Emohead, who decides for unknown reasons to make her an Emo Ranger.2005 short film She is given the powers of the Weeping Tears Ranger, due to her constant sadness beyond what is normal for the others. In spite of herself, she proves instrumental at beating back the Hoodie Patrol, and helping form the Emo Megazord for the first time. She mostly fades into the background after this, though she is there for her friends whenever a monster shows up.

Much like the others, Vicken is shocked when John decides to go StraightxEdge.Weed Better Sober Up She later learns the hard way that collecting too many teddy bears for herself can be a bad thing, when the Evil Empress brings her bears to life and threaten Chelmsford with them. Vicken finally decides to donate the bears to a charity in Africa. She reasons that if the bears come to life again outside an African hut village, there won't be any cities left for them to destroy.Bearly Legal / Scare Bear She mostly fades into the background again, but is there for her friends when they need help taking down the Pop-Rap Collaboration MonsterTop of the Flops and taking down the New Rave Pirates.Rave New World

She even develops a sense of humor as time goes on, cracking one-liners with the others when battling the Extra Value Meal Fight Bots.You Want Cries With That?

After a few more adventures of saving Chelmsford as the Weeping Tears Ranger, Vicken finds that the aliens begin warning each other to avoid Earth. Only one, who takes over Happy Valley High School and turns it into his evil lair while masquerading as a principal to fool emo kids' parents, dares to ignore that warning. Otherwise, the aliens decide to leave Earth alone. The Evil Principal is able to hide his ruse for quite some time, resulting in Captain Emohead's emo sensors failing to trip. By 2011, Vicken has decided to put her Emo Wristband Morpher in storage while she attempts to carry on with her life.

Fearing Mary Jane cannot handle the menace alone, Emohead calls Vicken out of retirement - along with her other five former teammates. Alas, the Rangers don't last very long in battle before the Principal uses a one-time-only option on his robot to generate a time warp. With this, the Principal sends Vicken and the others to the year 2025 - place unspecified. Mary Jane is forced to land a lucky shot and defeat the Principal on her own.

As of the end credits, it is still unknown how Emohead will be able to save the veteran Rangers. Vicken's fate remains an uncertainty. Emo 5, suddenly bored with everything, looks forward to the displacement as an opportunity to witness the Rangers again in the future and use their predicament for his amusement. He jokes of "unending adventures" with them. However, Emohead shoots this down as a "dickheaded idea."

The game by StormVideoGames.com features a highly-simplified version of Vicken, basing her appearance in the game off of her debut in the 2005 short film. This is in keeping with the fact that the game also reiterates the short film's plot. Vicken is the second-to-last Emo Ranger to be playable, with Ross, Luke, and John preceding her and Stef following her in unlock sequence. With numeric keys, Rangers can be selected amongst. The final levels require unlocking Stef, though any previous Ranger can be used at any time by pressing buttons 1-4. To return to using Vicken, users need only press "4."

Vicken's Weeping Tears attack, hinted at but never displayed in the actual show, is prominently on display in this game.

Under the EA website and Origin username of "DozerfleetProd," that same brand also uploaded Sims 4-compatible re-creations of the Rangers to the Sims 4 Gallery on TheSims.com. That particular Gallery upload includes the six main series Rangers as a single household, though players who import the Rangers into Create-A-Sim can still choose to delete the other Rangers from the household if they only wish to play with Vicken. Mary Jane was not included with that package.

With the combined character downloads and mods, playing as Vicken in The Sims 4 should not be difficult. Also uploaded to the Gallery under the DozerfleetProd account was an estimated re-creation of Emo Road, allowing players to place Stef or any other Ranger in bedrooms based on the one used for their bedroom scenes in the show. That same lot includes a shed that is a secret passageway to a crude re-creation of the Emo Command Center, though Captain Emohead and Emo 5 are nowhere to be found.

Vicken loves to write deep, meaningful poetry - though she does need lessons on making it intelligible. Captain Emohead seems the least fond of her, given her near-uselessness when they first meet. She is initially the most depressed of all the teens, and can begin sobbing at the slightest provocation. She improves significantly as time goes by, until her moniker barely fits her anymore. Her confidence grows the more times she succeeds as a Ranger. She is shown to have a much more keen sense of self-control and common sense regarding online dating than what her friend Stef demonstrates. Her appearance in 2015 seems to suggest that in time, she cleans herself up considerably - and even becomes a healthy and stable human being.