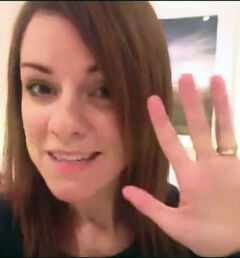 Vicken is an actress, tutor, and special needs educator originally from Chelmsford. She portrayed Vicken in Mighty Moshin' Emo Rangers, and then proceeded to pursue a career in education after first earning a degree in biology.

Vicki began her college education at the University of Portsmouth in 2005, around the same time that she and Chris met to produce the Emo Rangers original short film. She was as surprised as many to see that Emo Rangers got rapidly popular the following year, getting MTV syndicated in late 2006 approximately a full year after it was produced. By that point in time, Vicki met the man who would one day become her husband.

Stef and Vicki have been friends since childhood, and that carried over into their onscreen chemistry as best friends. Vicki later went on to study biology in her spare time while on the set of Emo Rangers. Vicki's interests were always in biology and in teaching / tutoring. She graduated in 2011 from the University of Portsmouth.

Due to her busy college schedule at the University of Portsmouth, Vicki had very limited availability for shooting dates for Emo Rangers. She managed all the same to be around for the 2005 film, "Beware the Funky Monkey," "A Fashionable Choice," and "Emo Rangers vs. Santa." However, she had only a very tiny role in "Weed Better Sober Up" - largely due to her lack of availability due to studies. She featured as the main focus of "Bearly Legal," but was almost completely absent from "Top of the Flops" afterward. Her role in "Rave New World" was also minimal. She was given slightly more to do in the next two episodes, but still mostly remained in the background.

Her character's reactions to elements of her power set also show that the least amount of thought, care, respect, or attention was put into her role, giving her character an even more insulting disposition than Luke Markey's character. She took it in good stride all the same. A key example of this can be Vicken's perpetual dismay over her special weapon being a tissue box, outright calling it "lame" at one point.

Her emphasis on advising vulnerable youth shows when her character tries to convince Stef's to make wiser online dating choices, showing the understandable frustration real tutors face with kids who just don't learn - with her expression to the camera when Stef appears to have learned a very warped moral-of-the-story that wasn't the one Vicken was aiming to preach.