Volkonir Meets the Power Rangers (and the Emo Rangers) 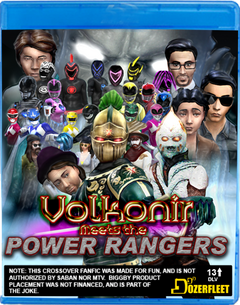 Mock-up Blu-ray cover for the comic, like that's ever gonna happen!

Volkonir Meets the Power Rangers (and the Emo Rangers) is an ascended fanfic made in The Sims 4 in April - July of 2017, one which sees the Dozerfleet Comics hero of Volkonir team up with the 1993 TV series Power Rangers and their counterparts from the 2017 reboot film to stop a monster that threatens the entire Henshin Show Multiverse. The Emo Rangers, for reasons not specified in the comic itself, also decide to get involved. More about the specifics for those other teams can be read here. This article focuses primarily on the Emo Rangers' role.

Note: This synopsis is Emo Rangers-focused. See the article at Dozerfleet Database for a lengthy breakdown.

Various irregularities begin forming in the Emoverse, and Captain Emohead determines that it's a chain reaction being caused by an instability in the Percolation Wave that has found its way to the Emoverse from the greater Dozerfleet Megaverse. MODM from the Dromedeverse shows up and informs him and Emo 5 that the only way to set things right is to travel with him and save the Power Rangers of 1993 with the help of the Power Rangers from 2017 - plus Volkonir. They have to all team up and kill an omnicidal maniac daywalking Irish-alien vampire with a bad Russian accent calling himself Slaisionnach, who looks like a bad mix of a Russian-Jamaican and Raiden from Mortal Kombat, for...some reason.

They initially travel to Volkonir's world, after a misunderstanding by local law lands 1993 Zack and Trini in Gallatin County Jail near Bozeman, MT. When efforts to bail those Rangers out fail, they travel to 1993-verse Angel Grove without them. Kim from 2017 finds herself in some trouble of her own and stays behind at first. Jason from 1993 is hospitalized after trying to take on Slaisionnach alone.

Slaisionnach is revealed to have created his own version of the Putty Patrol, called Slaisionnutties. Tommy, Fai, and Volkonir take on Slaisionnach directly. Jason and Luke go after a lesser monster named Clownscavator. The other strike teams battle the Slaisionnuttes, and try to stop them from having "a picnic of death," as Captain Emohead puts it. In spite the Rangers' best efforts, huge portions of downtown Angel Grove are destroyed by all the violence, murder, and mayhem.

Things take a turn after MODM rescues 2017 Kimberly, and she discovers that smashing a coffee mug over Slaisionnach's one fang will weaken him. By this point, he's trapped 1993 Kimberly in the Twin Towers jail near LA, as the fight has spread to other cities. Volkonir's girlfriend, Kayla Tarington, is called in to rescue her so the others can keep fighting. After a regrouping following most of the Slaisionnutties being killed, Volkonir and the Power Rangers of both teams decide to focus their remaining efforts entirely on Slaisionnach. The Emo Rangers, however, make taking out Clownscavator their new goal.

After some more hours of fighting go by and everyone is exhausted, Slaisionnach finally grows giant sized. The Phaemer Village Peacekeepers (similar to the Guardians of the Galaxy) show up out of nowhere to help take him down. The 1993 Dragonzord combines with the 2017 Megazord to stand a chance against a giant Slaisionnach. After using Mega Emo Fight Bot to defeat Clownscavator, the Emo Rangers pitch in.

Everyone returns home safely after Slaisionnach finally dies. Captain Emohead congratulates the Rangers on not dying, saying he was "87% certain" they wouldn't all come back. Ross complains that all the other Rangers' constant talk about Krispy Kreme and Biggby has worked up in him an appetite for donuts from Crosstown. Luke is hesitant about going along, but Fai promises that she'll join him if they make it "a date." This erases all of Luke's concerns instantly.

Later on, it's revealed that MODM's glitching of the multiverse has resulted in Stephanie Meanswell from LazyTown somehow winding up in the Emoverse - with the Evil Empress sending the Hoodie Patrol to abduct her. Luke and Vicken are the only Rangers able to make it, much to Luke's annoyance.

Experimentation for the comic began in Sims 4 around April of 2017, shortly after the US release of Saban's Power Rangers in theaters on March 24th of that year. It was decided that the Emo Rangers should be included for fun, even if they played a minimal role. After some experimentation with a custom helmet mesh by Grilled-Cheese-Aspiration on Tumblr led to the film Rangers being able to exist inside Sims 4, it was not hard to similarly reverse-engineer those helmets to make Emo Ranger helmets.

Emphasis was placed on making as much of the story portable as could be to the Sims 4 Gallery website, meaning that anyone could download the Rangers or their suits and create their own Emo Ranger adventures inside the game.

An early, incomplete version of the fanfic webcomic was added to Mod the Sims on June 18th of 2017. On July 7th of that same year, the completed edition of the story was fully online. It quickly garnered just shy of 1500 views within two days of completion.