The following is an overview of the various mecha utilized by the Emo Rangers.

The Emo Rangers inside their main cockpit.

The Emo Megazord (also referred to as Mega Emo Zord) is the combination of the five Emo Zords: Introspective Bloke, Chaos Mohawk Bloke, Chronic Stoner Bong, Bleeding Heart Pterodactyl, and Weeping Tears Tiger Dragon. This is the first Megazord to be featured in Emo Rangers, though other combinations may or may not have preceded it in the largely-unexplored expanded universe.

Like Ross himself, the Zord can emit an energy beam that fills the target with saddening and distracting thoughts. It seems to do physical damage to an opponent as well. It forms the Emo Megazord's head and main cockpit.

This Zord's full features are never shown. It forms the chest of Emo Megazord by default. However, it is able to be swapped out with the FashionxCore Emo Zord for that role. When that happens, the Pterodactyl becomes a set of rear wings for Emo Megazord, similarly to the Falconzord in season 3 of actual Power Rangers.

This Zord can utilize and amplify the smoke buildup from John's joints to deliver a powerful chemical attack on enemies. It also forms the left arm of Emo Megazord.

Little is known about this Zord, other than the fact that - much like Luke himself - it relies heavily on pure physical rage and capability rather than on anything pertaining to some special additional abilities. It forms the right arm of Emo Megazord.

The full capabilities of this Zord are never shown, though it seems to be able to take a lot of damage. It forms the legs of Emo Megazord. 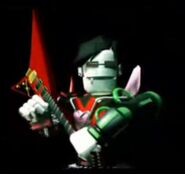 The Emo Megazord was eventually replaced with the Mega Emo Fight Bot for season 2, though the reasons for this are never completely explained in-universe. In production, the change over was due to Nick Pittom adopting improved animation and character modeling standards, as well as loss of original stock footage and files for the original design. "Fight Bot" was also used for improved commercial value on MTV, as it reduced the risk of season 2 being accused of trademark infringement over use of the word "Zord."

It is possible that the new configurations were needed so that the other bots could support John's new StraightxEdge Samurai powers.

This upgrade shows an ability not seen in the original, though it may still have the same abilities along with the new features. It still serves the same purpose as before, but has new capabilities and tougher armor. I can hitch a ride on the back of Vicken's new Fight Bot.

Serving the same purpose as before, this upgraded machine can deliver and take more damage individually.

This machine replaced the Bong as being the Mega Emo Fight Bot's left arm. Its sword combined with elements of the other Bots to form the combined's bot's sword.

Vicken is only shown using this solo on one occasion: when battling the Extra Value Meal Bots. Her eye lasers destroy some giant pickle slice-shaped doom discs. The upgrade not only can fly or form Mega Emo Fight Bot's legs; but can also allow other Fight Bots to ride on its back. However, only Ross is shown in-series doing this.

Stef's new Fight Bot was upgraded for unknown reasons from a pterodactyl to a humanoid ladybug. With a few new features, it is somehow still able to support serving the same combine function as its predecessor. However, it is unable to become spare wings like the old model. Likewise, it can no longer swap with Fai's Bot to create a Fashionable Mega Emo Fight Bot.

Very little is known about this machine, as it appeared at the last minute to save the day in "A Fashionable Choice." It is seldom shown ever doing much, but it is able to swap itself in for the Bleeding Heart Pterodactyl chest piece. This turns the Pterodactyl into a pair of back wings for the Fashionable Emo Megazord, which has different hair and can deliver more punishing blows. The spray can that this bot comes with gets more powerful in Fashionable Emo Megazord mode, and can take out baddies too powerful for the Acid Guitar.

This upgrade lost the ability to combine with the five main assault machines, but got more powerful weaponry for itself as a trade-off. It can also take more abuse, and delivers better hits. Much like with the other redesigns, the emphasis appears to be on referencing the Shogun Zords from season 3 of Power Rangers, as opposed to being straight adaptations of the first season Dino Zords.

The Neo-Chronic Stoner Emo Fight Bot seen in the 2015 special is a significantly beefed-up version of the original Bong Zord, and far meaner-looking. It is unknown if this machine would have been able to combine with the Mega Emo Fight Bot or not, since the Rangers were never given a chance to summon their Fight Bots in that special.